Whan that May with his sonne sa bryght

Whan that May with his sonne sa bryght

And giveth preyse to him wha sitteth on hie.

Yf onlie she wad chuseth to be hys.

be my guidwyf and with mee dwelle.

I am but a sympell churl, tis treue

Now womman thinketh to be wyse

And thee shal everr blesst be

By loveth hym as he loveth thee.

Based on The Canterbury Tales prologue*, I’m hopynge that this explains itself, and does not seem like a mock of the great parent of our world-encompassing language.

With a little effort (and a modern font) Chaucer’s Middle English comes alive and reads quite easily. It is great fun all round having children read it out and they can, using rhyming couplets (as above), reproduce their own homage. The vocabulary and spelling has to be supported, of course, but the only tricky bit is getting the first line. After that’s done, it more or less writes itself for the first couple of verses. And then you've done it; your primary pupils have written in Middle English! We did it recently for April (hence the prologue reference) to meikle delyghte and som pryde tae.

After such a lesson, there's only one direction; onwards and backwards to Beowulf! Kids love this, Beowulf slays Mylie, Nikki, Ariana and all the other swamp-owned succubi.

When April with its sweet-smelling showers
The droghte of March hath perced to the roote,
Has pierced the drought of March to the root,
And bathed every veyne in swich licour
And bathed every vein (of the plants) in such liquid
Of which vertu engendred is the flour;
By the power of which the flower is created
...............
FYI: There are many youtube examples for how to pronounce this; some are rubbish, but you'll quickly identify them.

Posted by Seneca Caledonia at 5:58 PM 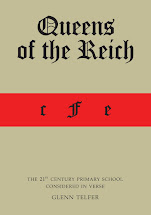